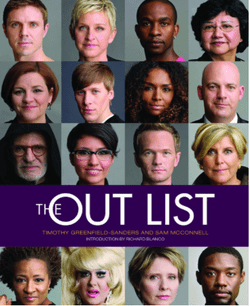 Last month, we premiered the trailer for The OUT List, a film of intimate docu-portraits of both well-known and lesser-known figures in the LGBT community from photographer and director Timothy Greenfield-Sanders.

Now, a coffee table book companion to the HBO documentary has been released, with text from the film's interviews by Sam McConnell and a new introduction by President Obama's inaugural poet Richard Blanco.

The book is available now.

If you missed the film, it is still available on HBO On Demand and HBO GO.

You can also see a trailer for the film, AFTER THE JUMP…