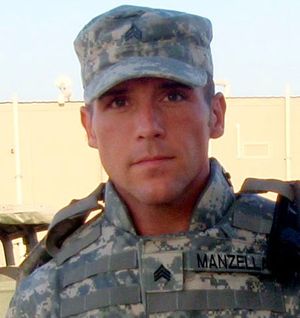 Condolences are pouring in on the Facebook page of former Army Sergeant Darren Manzella, who served two tours of duty in Iraq and spoke out against the military's 'Don't Ask, Don't Tell' policy. He died in a car accident near Rochester, NY Thursday night.

The Democrat and Chronicle reports:

Cpl. John Helfer of the Monroe County Sheriff’s Office, said the incident began as a two-car crash on the westbound lanes of the highway in Pittsford, when one car sideswiped another car about 8:30 p.m. Helfer did not identify the man killed.

The man (Manzella) stopped his car in the middle lane of I-490, got out and started pushing it from behind, Helfer said. A sport utility vehicle rear-ended the car, pinning the man between the two vehicles.

He was pronounced dead at the scene, Helfer said. The other two involved drivers were taken to Strong Memorial Hospital with minor injuries.

Manzella's father said he learned of his son's death online and his calls to police have not been returned.

Manzella was a brave, powerful and important voice in the battle to repeal "Don't Ask, Don't Tell", speaking out about his sexuality when it was taboo to do so. It led to his discharge.

SLDN wrote at the time of his discharge:

"The Iraq war veteran was the first openly gay active duty service member to speak with the media while serving inside a war zone….Manzella, 30, enlisted in the U.S. Army in 2002 and was twice deployed to the Middle East in support of Operation Iraqi Freedom. While under fire on the streets of Baghdad, he provided medical care to his fellow soldiers, Iraqi National Guardsmen and civilians. He was awarded the Combat Medical Badge, and also received several other awards recognizing his courage and service."

Watch Manzella's appearance on 60 Minutes in 2007, AFTER THE JUMP…

Our thoughts go out to Manzella's husband, family, and friends, and we give thanks for his courage and service.