The HuffPost's Lila Shapiro reports on suspicions about the underlying motive behind Republican strategist Tim Mooney's campaigns to legalize same-sex marriage in Arizona and Florida. Mooney campaigned against same-sex marriage in Utah in 2004 and worked to get Rick Perry elected governor of Texas. 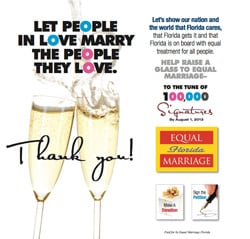 In recent months, as word of these efforts has spread through the gay rights community, veteran strategists have responded with suspicion and alarm, and have declined to lend their support.

In interviews with The Huffington Post, a dozen gay rights advocates noted that same-sex marriage remains unpopular among some demographic groups in both Florida and Arizona. They argued that the time is not yet right to bring the issue to a vote in those states, especially without enlisting the broader gay rights community to build support among voters.

Some advocates go further, suggesting Mooney's campaigns are aimed at draining resources from gay rights groups, or at opportunistically profiting from the gay rights movement's momentum.