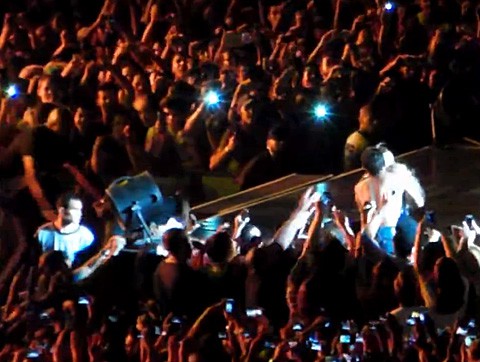 A fan pulled Beyoncé off the stage and into the crowd last night at a concert last night in Sao Paulo, Brazil, the NY Daily News reports:

Meanwhile scores of security surround the man and fellow concert goers appear to rough him up for the inappropriate move. Surprisingly, Beyoncé comes to his defense!

She tells her security that "it's okay," letting the man stay in the venue. She later asks him his name, then warmly tells him "I love you" before continuing on with her concert, as the crowd cheers.

Previous Post: « Isaiah Washington Says His Life Was Destroyed by ‘an Agenda’ After His 2007 Anti-Gay Remarks: VIDEO
Next Post: New Doc ‘Pier Kids: The Life’ Examines the Struggle of NYC’s Homeless LGBT Youth of Color: VIDEO »