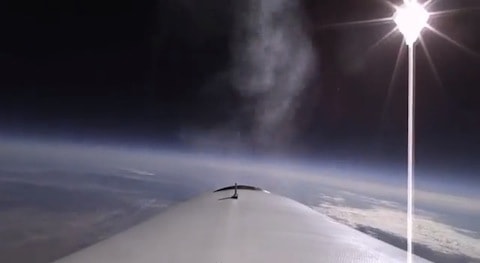 The SpaceShipTwo (SS2) reached a height of 69,000 feet and broke the sound barrier to reach a top speed of Mach 1.43 before touching down safely thanks to the feathering re-entry system. Founder of Virgin Galactic Sir Richard Branson expressed his pleasure with the test flight:

It was particularly thrilling to see for the first time today the whole elegant system in action during a single flight, including the remarkable feathering re-entry system. It was this safety feature more than anything else that originally persuaded us that the overall design of the system was uniquely fit for purpose. Everything we have seen today just confirms that view. Congratulations to all involved!