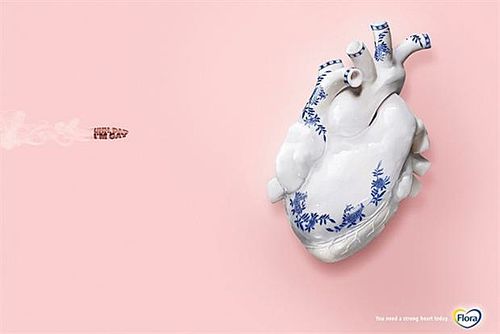 How this would even get to the photography stage is astonishing.

The advert seemed to suggest that receiving the news that your child is gay was comparable to receiving a bullet to the heart. Imposed on a pink background the commercial featured a bullet with the words “Uhh Dad I’m Gay” flying towards a heart made of china.

Lowe and Partners, an advertising agency based in Johannesburg are the company responsible for the design of the advert, though it was Unilever, the firm that owns Flora that was criticized for the advert.

The company’s twitter feed apologised for the campaign, saying:

“This advert was prepared by an external agency in South Africa and was not approved by anyone at Unilever. The advert is offensive and unacceptable and we have put an immediate stop to it. Unilever is proud of the support that our brands have given to LGBT people, including our recent campaign for Ben & Jerry’s on equal marriage.”