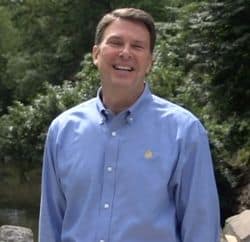 Peter Madden, a member of the Family First party in Tasmania and former Senate candidate, has called for the resignation of John Berry, the United States Ambassador to Australia. Berry (right), the former director of the U.S. Office of Personnel Management, secured the position in August after President Obama's June nomination.

As Towleroad previously reported, he is the first openly gay person to hold an ambassador position for a G-20 country.

Mr Berry, who is openly gay, introduced himself to the nation via a YouTube video last month in which he referred to his partner, Curtis Yee, as his spouse.

The couple have been together for 17 years and married in Washington DC in August.

But on Twitter, Mr Madden said Mr Berry's use of the term "spouse" was "a clear and deliberate contravention of Aus law".

The right-winger took to Twitter to vent his frustration early this morning: 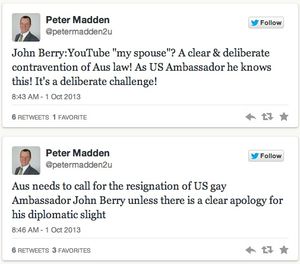 Australia has not yet legalized same-sex marriage, a fact which, according to Madden, should be used to oust Berry from his position. Will Berry respond, or is this sort of rabble-rousing useless to fight back against?

Watch the offending video, AFTER THE JUMP…