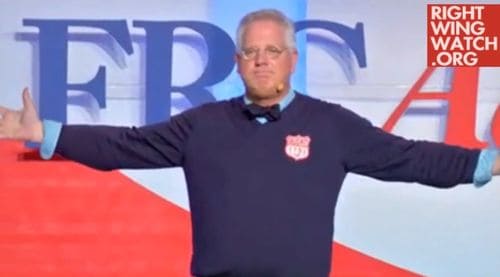 Glenn Beck was a speaker at the Values Voter Summit last weekend, and he took his time in the spotlight to discuss President Obama's supposed reign of terror on American religious freedom. And what better (read: more offensive) way to demonstrate than through concentration camp badges from the Nazi era?

At one point in the speech, Beck touched on the purple triangle. He asked his audience who had to wear the purple triangle in concentration camps, to which one person replied, gay. "No, not gay, that was pink," Beck responded (later stating that the triangle was meant for people who study the Bible), and the audience broke out into a short, but disturbing, round of laughter. That they would laugh at anything related to such acts of atroicity is scary enough, but Beck and his audience were also blind to the inaccuracy of the speech and its symbols.

Seeing that Beck was making his remarks at an event sponsored by an organization — the American Family Association — that believes that gay people were behind the Holocaust, it is curious that summit participants found it so funny that the Nazis tried to exterminate gay people.

Beck’s main contention that the Nazis went after people who “knew anything about the Bible” is also incorrect.

The purple triangle Beck held up was actually used to mark Jehovah’s Witnesses.

Sharing inaccurate information and enjoying each other's inflated sense of persecution seems like a wonderful way to spend a weekend, don't you think?