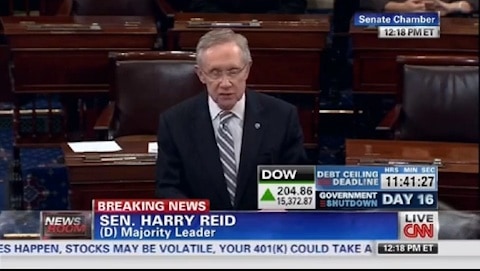 Senator Harry Reid and Senator Mitch McConnell announced a deal has been made to reopen the government after 16 days of nonsense, the NYT reports:

The deal, with the government shutdown in its third week, yielded virtually no concessions to the Republicans, other than some minor tightening of income verifications for people obtaining subsidized insurance under the new health care law.

Under the agreement, the government would be funded through Jan. 15, and the debt ceiling would be raised until Feb. 7. The Senate will take up a separate motion to instruct House and Senate negotiators to reach accord by Dec. 13 on a long-term blueprint for tax and spending policies over the next decade.

Mr. McConnell stressed that under the deal, budget cuts extracted in the 2011 fiscal showdown were not reversed, as some Democrats had wanted, a slim reed that not even he claimed as a significant victory.

The deal, he said, “is far less than many of us hoped for, quite frankly, but far better than what some had sought.”

Senator Ted Cruz also held a press conference announcing he would not block a vote on the deal and trumpeting a claim of Tea Party success against Obmacare. 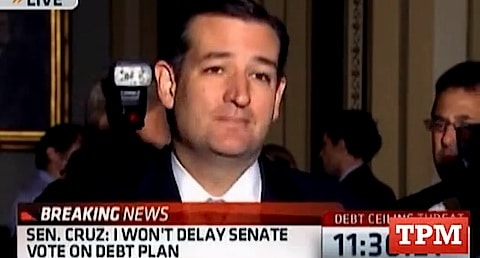