In an interview with CinemaBlend, Bridesmaids director Paul Feig revealed his top casting choice for a gay romantic idea he has in development: the sexiest man alive, Channing Tatum. 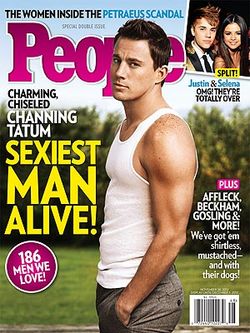 The biggest news Feig dropped between courses was that he is in development on a romantic comedy in which he'd like Tatum to star, which he expects will turn the genre on its head (worth noting– Tatum's reps have emphasized that Feig's enthusiasm does not mean anything is actually happening yet. So this is mainly wishing and hoping at this point). But before you start pondering which pretty starlet with share space on its poster, let me tell you it's a gay rom-com. It's premise is that a normal schmo gets involved with someone as crazy hot as the Sexiest Man of The Year, and basically can’t cope.

Tatum isn't officially involved in the project, but he sounds like the perfect choice. So who does Feig see envision playing opposite Tatum? New SNL member John Milhiser.