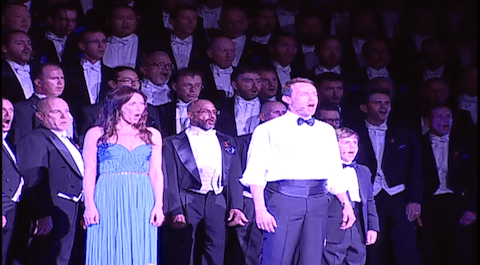 To coincide with National Coming Out Day the San Francisco Gay Men's Chorus released a teaser for their original cast recording CD of I Am Harvey Milk by Andrew Lippa (The Addams Family, Big Fish). Performed this past June at SFGMC's 35th anniversary concert, I Am Harvey Milk is an original work commissioned by the chorus that chronicles the life and legacy of Harvey Milk. The 300-member chorus is accompanied by the Bay Area Rainbow Symphony and features Noah Marlowe as Young Harvey, Andrew Lippa himself as Harvey Milk, and Tony Award-winning soprano Laura Benanti.

The teaser clip samples a few minutes from the finale piece, "Tired of the Silence", which implores gays and lesbians to proudly come out, and displays image after image of victories in the LGBT civil rights movement that were also shown during the live performance. The CD can be purchased on the SFGMC website and should ship later this month with the iTunes version of the album available by the end of October. The video as well as a few lyrics from select songs can be seen AFTER THE JUMP…

I'm spellbound as I hear the sound
Of Donna Summer fill the air. DIVA!
Everything I need is waiting there!

Friday night in the Castro.
Friday night and the weekend saves me.
I'm alright if I get to dance til the break of dawn
With the music on!

"Tired of the Silence"
Who will stand beside me, who will take my hand?
Whose will is greater than their fear?
Our goal has been sighted, our passions ignited
So now you're invited to appear.

Together is better than alone.
The hate won't vanish on its own!