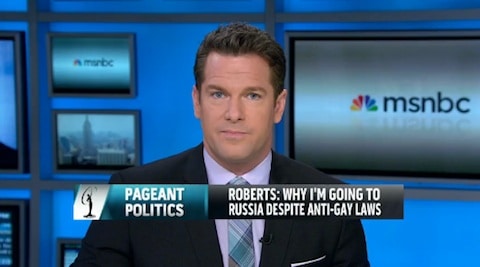 On his MSNBC show this morning, Thomas Roberts spoke with Miss Universe owner Donald Trump about his decision to host the pageant in Moscow, a decision that has created some blowback not only because of calls for a Russian boycott over the country's anti-gay laws, but because of Trump's positions opposing marriage equality and the sexist nature of pageants.

Roberts said this morning said he understood the "tremendous amount of hypocrisy that goes along" with his trip, in an interview on Morning Joe.

In the interview, Roberts asks Trump how he feels about Russia's anti-gay laws. Says Trump:

"In offering me this assignment, I'm an openly gay and married man, you are professionally flying in the face of these laws and you are agreeing that LGBT people are integrated and equal members of society, so does that change any of your prior public stances on marriage equality here in the U.S."

Trump says it does not change any of his prior stances:

The LGBT community will no doubt hold Roberts and Trump to their promises.