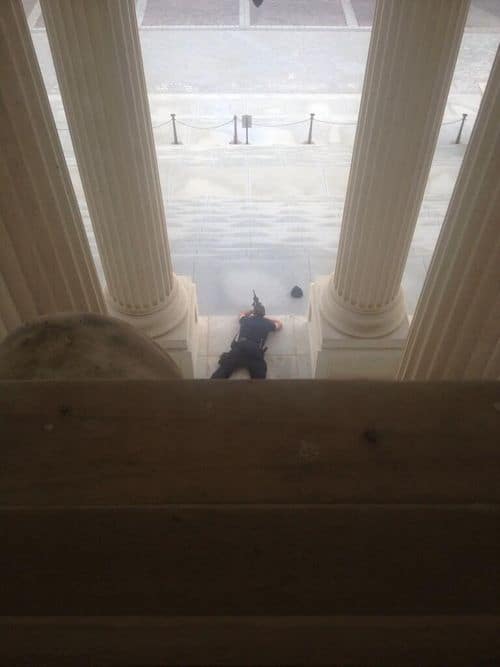 The U.S. Capitol was locked down for a brief time this afternoon after reports of gunfire outside and possible injuries…

The shots were reportedly fired in front of the Hart Office Building. The exchange took place after a brief car chase.

Kim Dine, the chief of the Capitol Police, said the shooting was believed to be an isolated episode, and not linked to terrorism.

Secret Service personnel pursued a woman in a high-speed chase from the area around the White House to Capitol Hill, according to a United States official.

Edmund Ofori-Attah and his wife, both missionaries from Togo, were about to tour the Dirksen Senate building when a black, two-door car whizzed by on Constitution Ave. pursued by two police cars. The car hit a barricade as it tried to make a left turn at a police checkpoint, and five to six gunshots were fired.

“We just dropped to the ground,” Mr. Ofori-Attah said. “I didn’t want to get hit.”

When Mr. Ofori-Attah got up a few minutes later, he said he saw police remove a toddler from the suspect’s two-door car. As police moved onlookers away from the scene, more police arrived and began chasing the suspect on foot, he said.

Video of the car chase, AFTER THE JUMP…