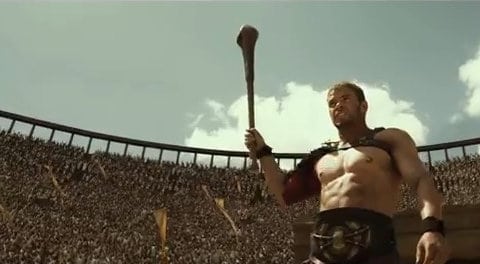 Perennial Towleroad lust object Kellan Lutz has recently emerged in another trailer for his upcoming film The Legend of Hercules (out in theaters January 10th).

Unlike the trailer, none of the ancient myths concerning Hercules depict him as a gladiator. However, they do mention that he was forced to wear women's clothing and serve as a queen's slave for a year, and that he also once lost a drinking contest against Dionysus the god of wine — why couldn't they have made a movie about those adventures?

You may also recall that Lutz's film is being developed alongside another Hercules film starring ex-wrestler/actor Dwayne "The Rock" Johnson. Apparently the two films will differ in terms of stud-factor (Lutz couldn't get as muscular as Johnson) and intended audience (Johnson's film seems more geared towards Marvel fanboys, while Lutz's will reportedly cater to the more angsty Twilight set).

Lutz's new trailer mostly re-cuts footage from the one we showed you this October. But it's always nice to see Lutz working the 300/Spartacus/Gladiator-aesthetic alongside armies of shirtless, bearded men.

Watch the trailer AFTER THE JUMP…

Previous Post: « Watch Episode 5 Of ‘Whatever This Is.’ From The Creator Of ‘The Outs’: VIDEO
Next Post: ‘Zombie Comet’ ISON Survives Near-Death Travel Around Sun: VIDEO »