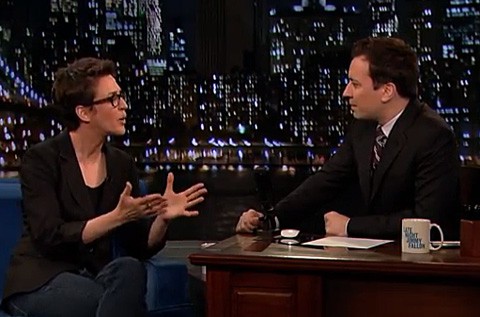 Rachel Maddow appeared on Late Night with Jimmy Fallon and discussed ENDA's passage in the Senate, revealing that it's still legal to fire people for being gay in 29 states.

Maddow also expresses her dismay that Republicans in the House won't even bring it up for a vote, and are pushing the false claim that LGBT are already protected under current law.

"One of the reasons [the House] doesn’t want to vote on it is because it’s already the law? It’s not already the law! You guys need a different strategy, people can look that up.”

Maddow and Fallon also discuss Chris Christie's win and what he plans to do with New Jersey when he starts running for president, and Maddow mocks the Republican strategy for its presidential nominees.

“Definitely pick the craziest guy you can find, that’s your ticket to success!”