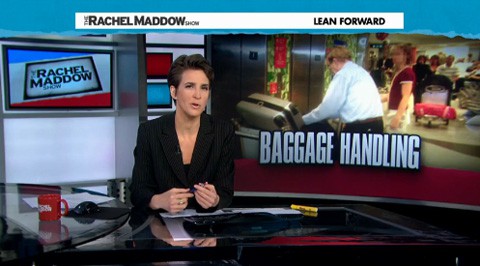 Says Maddow: "The two parties are moving in two completely different directions on this issue of policy – it's not being reported that way but that is the way it is going – you would think it is 1992 all over again – nobody calls it a 'culture war' anymore but as much as any time in the last generation right now, there are definitely two sides on this issue."

Yesterday, we reported that Mike Rosebush, a 'gay conversion therapy' advocate, was overseeing the cadet counseling program at the US Air Force Academy.

Last night, Maddow focused a light on the situation there and brought it back to the George Rekers "rent boy" story and his organization NARTH, with which Rosebush is associated.

"Did the Air Force hire [Rosebush] despite this being his area of expertise, or because this is what they wanted?" asks Maddow. The Air Force told her that the person who hired Rosebush has retired but that indeed, Rosebush is serving in that position, and was hired for his leadership development and analytical skills. 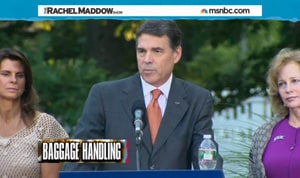 Maddow then moves into a broader look at the massive but largely unreported divide between the blue states and the red states on gay rights. She takes a look at the proclamation by Texas yesterday that the National Guard would not process housing allowances for gay couples and notes that "radically anti-gay politics are in ascendance in the Republican party."

Adds Maddow: "In Texas the political calculation is that it is more important to be anti-gay than to support the troops."

She then takes a moment with Illinois Governor Pat Quinn to talk about the passage of marriage equality in Illinois.

Watch the engaging segment, AFTER THE JUMP…