For several years, technology has been moving away from skeuomorphism, the concept that the digital devices and technologies we interact with should mirror their real-life, physical analogues.  The relative rigidity of hardware has given way to the flexibility of software–think of the decline of BlackBerry, with its many-buttoned devices, and the rise of the iPhone, an homage to the power of software idealized in a single pane of glass. 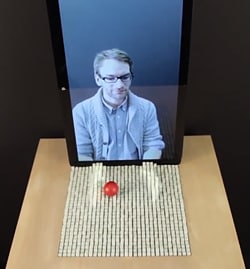 For Sean Follmer of the MIT Media Lab, that's a problem. "As humans, we have evolved to interact physically with our environments, but in the 21st century, we're missing out on all of this tactile sensation that is meant to guide us, limit us, and make us feel more connected," he told Fast Company. "In the transition to purely digital interfaces, something profound has been lost."

This week, Follmer, along with his colleague Daniel Leithinger and under the supervision of Professor Hiroshi Ishii, unveiled inFORM, a so-called 'scrying pool' that allows its user to interact with digital information in a tactile, three-dimensional way.  Fast Company has the details:

The technology behind the inFORM isn't that hard to understand. It's basically a fancy Pinscreen, one of those executive desk toys that allows you to create a rough 3-D model of an object by pressing it into a bed of flattened pins. With inFORM, each of those "pins" is connected to a motor controlled by a nearby laptop, which can not only move the pins to render digital content physically, but can also register real-life objects interacting with its surface thanks to the sensors of a hacked Microsoft Kinect.

To put it in the simplest terms, the inFORM is a self-aware computer monitor that doesn't just display light, but shape as well. Remotely, two people Skyping could physically interact by playing catch, for example, or manipulating an object together, or even slapping high five from across the planet. Another use is to physically manipulate purely digital objects. A 3-D model, for example, can be brought to life with the inFORM, and then manipulated with your hands to adjust, tweak, or even radically transform the digital blueprint.

For now, inFORM might seem like mostly an academic novelty: cool to look at and think about but limited in its real-world applications.  But as Follmer points out, the ingenuity of today often becomes the technology of tomorrow–and it can do so much more quickly than imagined:

"Ten years ago, we had people at Media Lab working on gestural interactions, and now they're everywhere, from the Microsoft Kinect to the Nintendo Wiimote.  Whatever it ends up looking like, the UI of the future won't be made of just pixels, but time and form as well. And that future is only five or ten years away. It's time for designers to start thinking about what that means now."

inFORM really is one of those see-it-to-believe-it innovations–check out a video of MIT's demonstration of the new technology, AFTER THE JUMP…