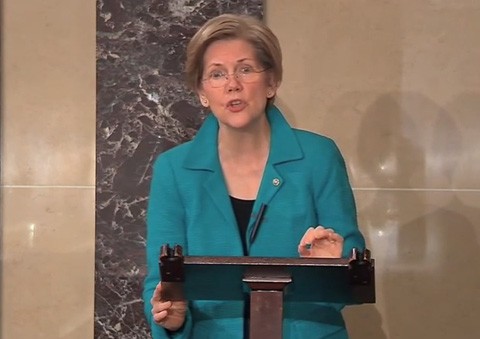 In a floor speech on Wednesday, Senator Elizabeth Warren (D-MA) ripped Republicans for filibustering judicial nominees, because they are so beholden to special interests:

"Powerful interests don't give up. They shift their fight to the courts because they know that if they ccan weaken or overturn a law in court they turn defeat into victory. And if they can rig the courts by putting enough sympathetic judges in lifetime positions a friendly judicial system will give them a chance to undermine any law they don't like."

And, they are also still so extremely bitter that Obama got reelected that they are doing anything in their power to deny him of exercising what the people wanted when they voted Obama in:

Previous Post: « Denver Wrangler Gay Bar Hit with Protest for Discriminating Against Trans People, Drag Queens: VIDEO
Next Post: With Hawaii and Illinois, More Than 1 in 3 Americans Live Where Gay Marriage is Legal »