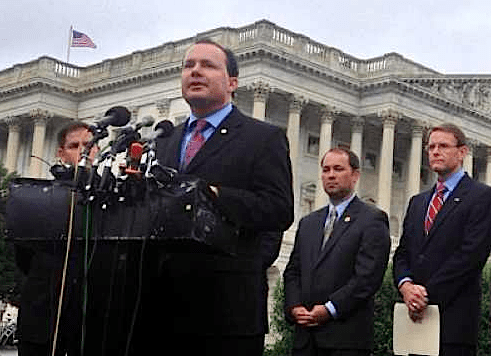 A dozen Republican senators have introduced a bill that would bar the government from denying any person or group tax-exempt status for exercising their religious beliefs, effectively giving individuals a 'license to discriminate' against LGBT couples

The proposed Marriage and Religious Freedom Act, authored by Sen. Mike Lee of Utah (pictured above with FRC's Tony Perkins), would allow organizations to refuse service or products to gay people simply by citing their religious beliefs. Lee believes that while President Obama promised to respect religious liberty in his statement on the Supreme Court's repeal of DOMA back in June, his administration may do otherwise. Washington Examiner reports:

Lee thinks federal officials could work around that promise by trying to revoke the tax-exempt status of churches that support traditional marriage.

"We need not just statements, but we need legislation to protect religious liberty from this kind of potential threat," he said during the interview. 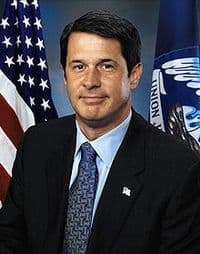 "Religious freedom is a foundational principle to our great nation, and it's something that Louisianians and folks across the country cherish – including millions of Americans, like myself, who support traditional marriage," he said. "But, for a number of reasons, this basic freedom is under attack by the current administration. This bill will protect groups from administrative attacks, such as additional hurdles with taxes or obtaining federal grants or contracts."

You may recall Sen. Vitter espousing his 'traditional values' back in 2007, when it was revealed that he had been involved in a high-profile prostitution ring in Washington D.C.

The legislation mirrors a the House version which was introduced by Rep. Raul Labrador (R-ID) back in September.