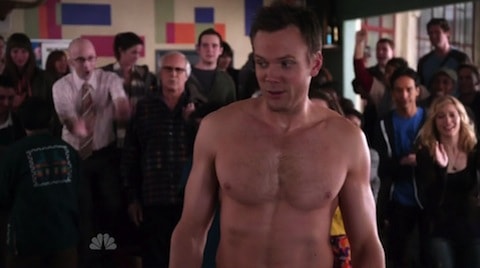 —  The hunky host of The Soup Joel McHale returns to Greendale Community College on NBC's Community Thursday at 8 p.m. Eastern. Series creator Dan Harmon is also back at the helm.

More picks and clips, including what to watch on New Year's Eve, AFTER THE JUMP…

—  You've got plenty of options for background noise as you ring in 2014. You could twerk along with Miley Cyrus on Dick Clark's New Year's Rocking Eve With Ryan Seacrest 2014 at 10 p.m. Eastern on ABC. Or yuck it up with New Year's Eve Live With Anderson Cooper and Kathy Griffin at 9 p.m. on CNN. Jane Lynch co-hosts on New Year's Eve With Carson Daly at 10 p.m. on NBC. (Though, to be honest, we'll be binge-watching the annual marathon of The Twilight Zone all day on SyFy.)

—  Gordon Ramsey's not the only one whose brand is built around him screaming at people. Catch the return of dance coach Abby Lee Miller on Dance Moms Wednesday at 9 p.m. Eastern on Lifetime.

—  Gaze into a Swarovski crystal ball and predict next year's most heinous celebrity fashion trends with Joan Rivers on Fashion Police Friday on E! at 9 p.m. Eastern.

—  Indulge in the splendor of Downton Abbey when the beloved series returns Sunday at 9 p.m. Eastern on PBS. Keep an eye out this season for Tom Cullen (you may recognize him from Andrew Haigh's Weekend). He's new to the cast, along with Gary Carr and Julian Ovenden.