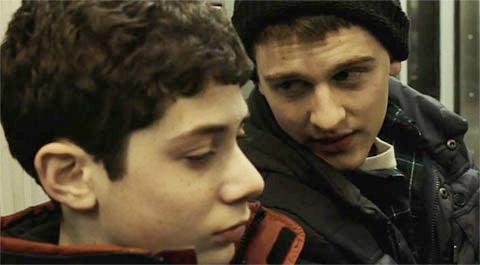 At a SXSW brunch hosted by the Austin Gay and Lesbian International Film Festival (AGLIFF), we ran into gay director Daniel Laabs whose dramatic film “Easy” is playing in the shorts program.

In a video interview with Towleroad, Laabs explained why his films’ exploration of athletic homophobia is relevant now more than ever.

Easy focuses on a sensitive pre-teen gymnast named Jeffrey and his strained relationship with his older brother.

Jeffrey’s skill and his brother’s new girlfriend have created distance between the two siblings. Jeffrey spends most of his time either practicing alone in the gym or admiring YouTube videos of hunky Olympian gymnast Danell Leyva. But he soon realizes that not everyone appreciates his sport’s athleticism and grace. And their thoughtless comments could damage Jeffrey’s love of the sport (and himself) forever.

Laabs works in a realistic minimalist style that uses light to set each scene’s emotional pitch — the gritty dimmed fluorescents of a subway car as the two brothers converse in private and the incandescent glow of a campfire as Jeffrey broods. His script also features succinct dialogue with a brooding yet passionate performance from young actor Brennen Bliss (who is himself an award-winning gymnast).

See Easy's trailer and interview with the director AFTER THE JUMP… 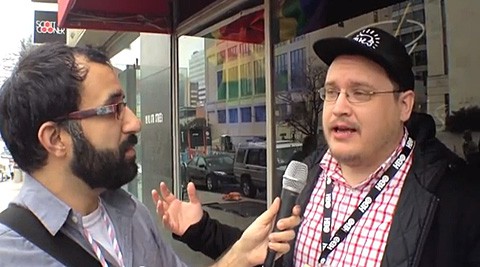 In an interview with Fandor.com, Laabs said:

“I didn’t come out until I was twenty-seven, which is only about three years ago. When I decided to return to making Easy… I was thinking about these ideas a lot. I was very afraid of the idea of being gay for many, many years, and now I was asking myself, ‘Why?’ I had figured out that I was gay around the time I was ten.

“I specifically remember my family talking about people that came out around then, like Ellen [DeGeneres], and them not being supportive of her choice. Everyone was talking about whether or not Ellen was allowed to say she was gay. That was the conversation I heard and occasionally participated in. As a kid I was very interested in being a comedian, or an actor. So it was at the forefront of my attention at that age.

”Today, with the Internet, that conversation is all over the place, most recently surrounding professional sports. I wanted to show the effect that conversation can have on people. I didn’t want to make a big statement, but in this case, this topic directly effects who the main character is. It was also part of my journey in finding an answer to that question of why I hadn’t come out sooner.”

Considering the recent coming out of football player Michael Sams and Russia’s anti-gay propaganda law passed before the Sochi Olympics, the issue of LGBT athletes has become relevant now more than ever. Though organizations like Nike, Anyone Can Play, and Athlete Ally and Outsports have all worked to combat anti-LGBT sentiment in sports, sports continues to be called ”the last closet.”

Laabs financed Easy’s production cost through a successful $3,000 crowdfunding campaign on IndieGoGo. You can now watch his film at Fandor.com. You can also watch Easy’s trailer and video interviews with Laabs and organizers of AGLIFF (the oldest LGBT film festival in the Southwest) below.