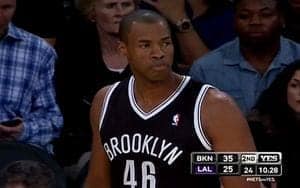 An announcement from the team:

The Brooklyn Nets have signed center Jason Collins for the remainder of the season, General Manager Billy King announced today. Collins, who signed 10-day contracts on February 23 and March 5, has appeared in eight games for the Nets, totaling five points, six rebounds and six steals in 78 minutes. Currently in his 13th NBA season, Collins has played in 721 NBA games, with averages of 3.6 points and 3.7 rebounds in 20.6 minutes per game.

Previous Post: « Bryan Cranston Goes ‘All the Way’ On Broadway As Lyndon B. Johnson: REVIEW
Next Post: How to Get a Gay Best Friend: VIDEO »