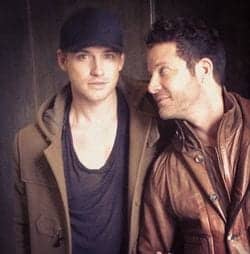 Parents from both sides and siblings were among the 220 guests, which included longtime friend Winfrey, Rachael Ray, Katie Lee, Rebecca Minkoff, Irene Neuwirth, Busy Philipps and Elizabeth Hendrickson from The Young and the Restless.

Wedding planner and friend Marcy Blum Associates collaborated with the men to design the evening's festivities. The invites were done by Elum Designs for Sugar Press. The décor combined their color palette of black, whites and creams and included gold touches, and natural elements like geodes and minerals, mixed in with lush greenery.

The ceremony wall was custom built and linens from Berkus's own fabric line blended with his Target collection.