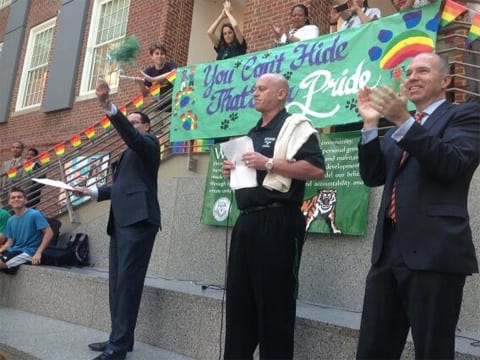 Pete Cahall, the principal of Washington D.C.'s Wilson High School, came out as gay to his students at a Pride event on Wednesday, the Washington Post reports:

Wilson High School Principal Pete Cahall came out to his students as gay at a school-wide Pride Day event Wednesday, shaking as he said that he had “hid in the shadows for the last 50 years” but was inspired by his students to declare his sexual orientation openly. “I want to say publicly for the first time because of your leadership, care and support that I am a proud gay man who just happens to be the principal of Wilson High School,” he said in the packed atrium at the D.C. school, flanked by Mayor Vincent C. Gray (D) and David Catania (I), the D.C. Council’s first openly gay member.

The school's GSA also congratulated him:

Congrats Principal Cahall for coming out as a gay man! We are so proud of you!