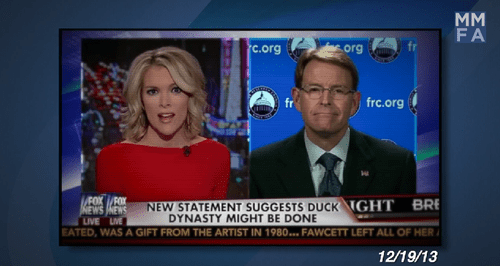 According to the report, Kelly's shows account for 17 of Perkins' 30 Fox News appearances since the end of the 2012 GOP primary season.

Watch a video spotlighting Kelly's cozy relationship with Perkins, AFTER THE JUMP…

But these numbers don't fully account for Kelly's role in whitewashing the anti-LGBT animus that motivates Perkins' and FRC's work. She's described FRC as "a group whose mission is to advance faith, family, and freedom in public policy and culture from a Christian worldview." And Kelly has repeatedly peddled Perkins' own talking points – suggesting that "Christian beliefs and Christian rights" are being trampled as LGBT rights are ascendant, charging gay rights activists with being intolerant, lamenting that it must be "alienating" for Perkins to be criticized for his anti-LGBT views.