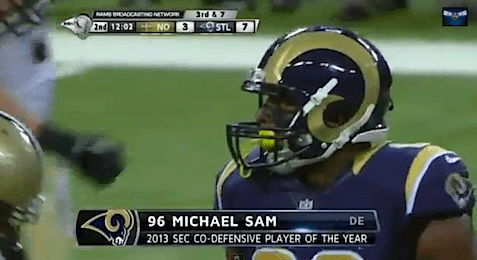 With 5 minutes, 13 seconds to go in the first quarter of a match-up against the St. Louis Rams and New Orleans Saints last night, Michael Sam became the first openly gay player in league history to participate in a NFL preseason game.

As defensive end, Sam played the rest of the first half and about halfway through the third quarter.

Watch Sam's debut, AFTER THE JUMP…

"Mike played hard," coach Jeff Fisher said. "I didn't watch him individually but I saw him on the hurry and the great effort outside the pocket. Saw him on a couple other plays. He slid down and made a play in the run game that stood out. We'll watch the tape and see how he did."

The Rams ultimately lost the game 26-24, but Sam said he had some valuable takeaways from the night:

Sam will have three more preseason chances to secure a spot on the Rams' roster before the season starts in September.