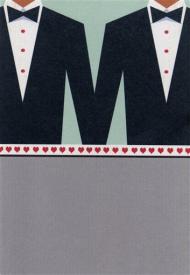 BYU is owned by the Church of Jesus Christ of Latter-day Saints, which believes that marriage should only be between a man and a woman.

The Hallmark cards reading "Mr. and Mr." and "Mrs. and Mrs." were removed when bookstore staff discovered them after photos surfaced online. According to BYU spokesperson Carri Jenkins, Hallmark stocked the shelves without realizing the school wouldn’t want to sell the cards celebrating same-sex marriages.

Explaining why the cards were removed, Jenkins cited BYU’s honor code which states "homosexual behavior includes not only sexual relations between members of the same sex but all forms of physical intimacy that give expression to homosexual feelings.”

Although the university does not intend to end its contract with Hallmark, staff have asked the company to not leave similar cards in the bookshop in the future.

Last month we reported that John Dehlin, a Mormon advocate of LGBT rights, was facing excommunication from the church.