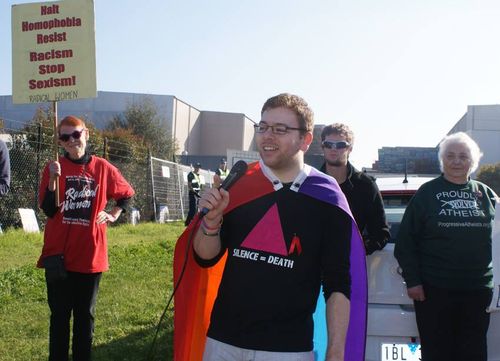 The anti-gay, anti-abortion World Congress of Families conference being held this weekend in Melbourne was hit with further setbacks after a wave of some 100 protesters showed up and attempted to block the entrance to the venue. 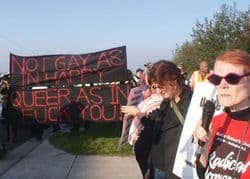 Many speakers, including the American campaigner Angela Lanfranchi, who planned to speak on the thoroughly debunked link between breast cancer and abortion, were unable to get through the gates in their cars. Their path was blocked by protesters holding signs with slogans such as “Our bodies are our property” and “Women are not incubators”.

More than 30 police officers formed their own barrier on the opposite side of the gate in the quiet street of Star Crescent, located in an industrial area. It forced attendees to trickle through the gates one by one as church security struggled to establish whether they had registered. The Monty Python satirical song Every Sperm is Sacred boomed from a sound system organised by protesters.

The paper adds that shortly after the conference began, a protester dressed in white and covered in fake blood stormed the stage inside and began screaming "We don't want your backyard abortions!" She was then dragged away by security as attendees chanted "Pray for her"

Check out a Sky News report on the protest, AFTER THE JUMP…