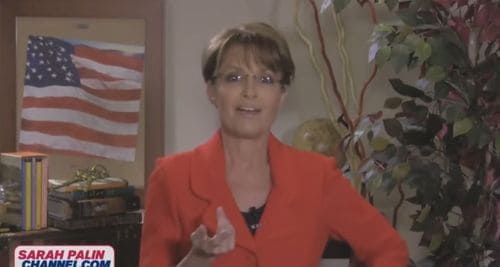 A new clip from Sarah Palin's online subscription channel, SarahPalinChannel.com, reveals a new level of nonsensical Palin madness. While attempting to discuss the minimum wage, Sarah becomes sidetracked and her sermon devolves into a 100% unintelligible mess.

In the clip, she aims to dig at Elizabeth Warren, but instead gets tangled in her biblical references and general muddled disdain. Here's the text to really drive home how unintelligible the sounds issuing from her mouth are:

"We believe"? Wait, I thought fast food joints, hurh. Don't you guys think that they're like of the Devil or somethin' I was. Liberals, you want to send those evil employees who would dare work at a fast food joint then ya just don't believe in, thought you wanted to, I dunno, send them to Purgatory or somethin' so they all go VEGAN and, uh, wages and picket lines I dunno they're not often discussed in Purgatory, are they? I dunno why are you even worried about fast food wages because dha.

Well, we believe an America where minimum wage jobs they're not lifetime gigs they're stepping stone"

A confusing sentiment to say the least. Should we be concerned? Only time will tell, though Ms. Palin should really consider hiring someone new to edit/write/produce her program.

Previous Post: « What To Watch This Week on TV: Channing Tatum Takes It Off With Bear; Party Down On ‘Please Like Me’ – VIDEO
Next Post: Satellite Launching This Wednesday Will Provide First Public High-Res Images Of Earth: VIDEO »