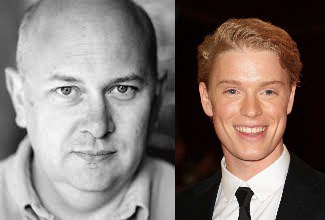 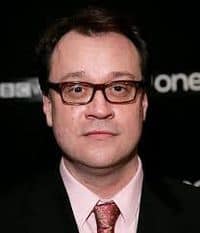 Fifteen years after screening Russell T Davies’ ground-breaking drama Queer As Folk, Channel 4 has boasted that new series Cucumber – also produced by Davies [pictured right] – is so risqué that it "wouldn't get past an American network".

Set to be aired next year, Cucumber looks at gay life across different generations and stars Vincent Franklin [above left] as a 46-year old man going through a relationship break-up, and Freddie Fox [above right] as a young object of his desires.

Cucumber will be broadcast alongside a sister show, Banana and a related web series called Tofu. According to Davies, the titles for the three shows came from a scientific study on the erection:

"It divided the hard-on into four categories, from soft to hard. One, tofu. Two, peeled banana. Three, banana. And four, cucumber. Right there and then, I knew I had my drama."

Channel 4’s Head of Drama Piers Wenger said that although the new series is "amazingly warm, incredibly funny and beautifully written", viewers might be "challenged" by the explicit content.

Named Channel of the Year on Friday at the Edinburgh International Television Festival, Channel 4 recently ran a campaign challenging homophobia in Russia, to coincide with the Sochi Winter Olympics. New projects from the broadcaster include Carol, which examines a lesbian affair between a female department-store assistant and an older married woman; My Million View Sex Change, a project showing young women recording the progress of their gender reassignments; and Gay Love: Sex and Apps, which will follow a young man looking for a partner on apps such as Grindr and Manhunt.

Watch a deleted scene from the original UK version of Queer As Folk, AFTER THE JUMP…