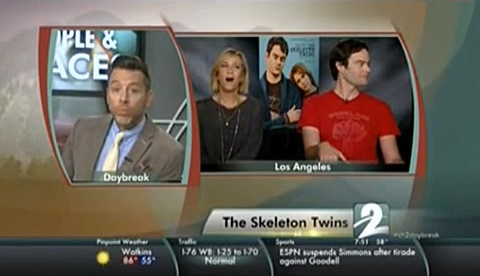 Kristen Wiig and Bill Hader are currently on screen together in The Skeleton Twins, in which they play a brother and sister from a dysfunctional family struggling to reconnect after many years.

KWGN's Chris Parente attempted to bluff his way through an interview with them after not having seen the film, and made the mistake of asking Wiig about her full-frontal scene, wondering if she has any advice for people on going nude.

Trouble is, there is no nude scene in The Skeleton Twins.

Watch Parente get caught red-faced, AFTER THE JUMP…