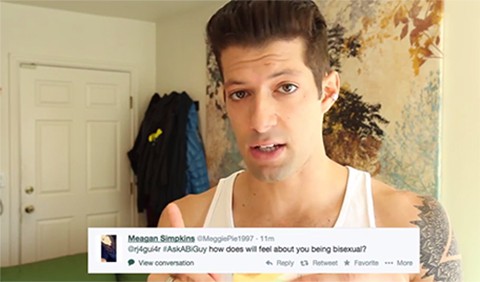 In honor of Bisexual Awareness Day, bisexual vlogger RJ Aguiar took questions from Twitter users about his own experience as a bisexual guy. Reacting to the oft recited statement, "I don't believe in bisexuality" Aguiar remarks,

“I mean, just because people don’t believe in something doesn’t make it not real. There are people out there who don’t believe in climate change or evolution — that doesn’t mean those things don’t exist. Same goes for my sexuality. I’m not the f***ing tooth fairy.”

Asked if he has a preference for one gender over the other, Aguiar responded that it's the person not the gender that gets him going, and right now that person would be his fiance Will Sheperd, who proposed to Aguiar last fall.

Watch Aguiar break down some common misconceptions about bisexuality, AFTER THE JUMP…