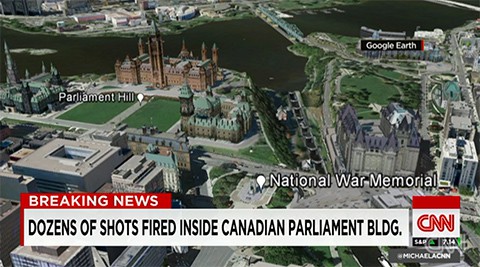 Two to three gunmen have attacked the Canadian Parliament, the War Memorial and possibly a mall in Ottawa, Canada, killing one soldier who was on guard at the national War Memorial according to USA Today. CNN reports:

The Canadian government has informed the United States that one shooter is dead in Ottawa, a senior U.S. official said. So far, there is "no indication the shooter has ties to violent Islamic extremism," but it is still extremely early in the investigation, the source said.

In response to the ongoing situation at Canada's Parliament, the North American Aerospace Defense Command, or NORAD, has increased its alert posture, CNN has learned. That means that it has increased the number of planes on a higher alert status ready to respond if needed. NORAD and Canadian authorities are in contact, an official told CNN.

Police officers rushed to secure the Parliament building and move occupants to safety as they hunted for what Canadian news reports said were possibly two or three assailants, in what had the appearance of a coordinated attack.

The Canadian Broadcasting Corporation reported that one assailant was killed. The condition of the soldier who was shot was not immediately clear. Witnesses reported earlier they believed the soldier had been killed.

Marc Coucy, a representative of the Ottawa Police Service, told the Canadian Broadcasting Corporation that officers were looking for “multiple suspects” in shootings at three locations.

The shootings came amid heightened concern about terrorist attacks in Canada, two days after a radical jihadist convert ran over two soldiers at a suburban Montreal strip mall, killing one of them. Prime Minister Stephen Harper, an outspoken critic of the Islamic State movement and other militant groups, has been considering the introduction of new antiterrorism legislation.

The shootings began about 10 a.m., just as the leaders of Parliament were holding their weekly meetings, suggesting the possibility of deliberate timing. Many of the lawmakers were rushed into secure rooms in the basement by guards.

Watch a terrifying video of a firefight taking place in the halls of Parliament, AFTER THE JUMP… 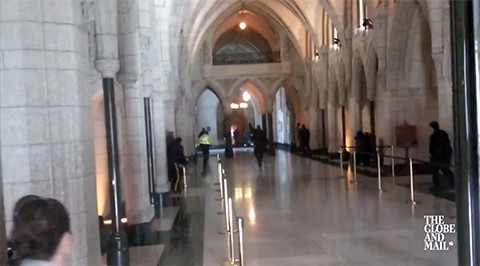