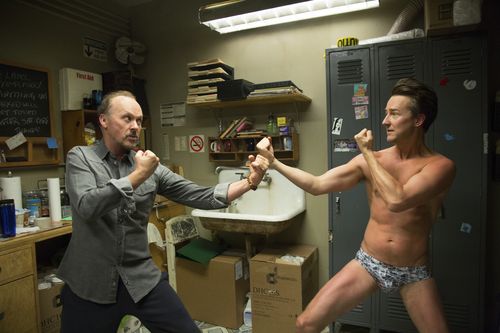 Washed Up Actor vs. Difficult Thespian Round 1 in the hilarious, awesome "Birdman"

A card in the bottom right hand of the star's mirror reads:

"A thing is a thing, not what is said of that thing."
-Susan Sontag

Which immediately complicates or maybe simplifies celebrity and art, two major themes (among a handful) of Mexican director Alejandro González Iñárritu's one of a kind new film experience. It's destined for major Oscar nominations and you should see it immediately. The movie has the simple and then complicated title of BIRDMAN, Or (THE UNEXPECTED VIRTUE OF IGNORANCE) which fits its two-faced nature perfectly. This quote is never addressed in the film but it's always stubbornly lodged there in that mirror, defying or playfully encouraging conversation about what this movie actually is. And what are reviews or after-movie conversation other than attempts to interpret and define?

Critics are often treated with petulant hostility in movies about show business, as if the filmmakers have an axe to grind and need to do that with grindstone in hand while their critical avatar/puppet hangs there limply, waiting to be struck with the sharpened blade. Birdman is no exception, immediately insulting its formidable theater critic Tabitha (Lindsay Duncan) as having a face that 'looks like she just licked a homeless man's ass,' before she's even spoken a line. But Tabitha is a slippery mark, portrayed as a voice of integrity in one scene and then a vicious unprofessional monster in another. This calls into question the reality of her scenes altogether. 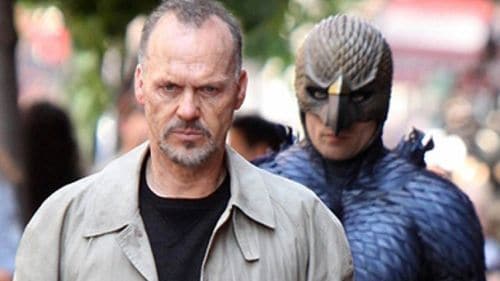 Riggan is attempting to regain artistic credibility with a stage comeback. Ignorant of theater or maybe just self-sabotaging, he isn't doing it the easy way movie stars tend to do it by starring in a respected revival but producing, directing, writing, and starring in a new play, an adaptation of Raymond Carver's "What We Mean When We Talk About Love". Complicating his efforts are a whirlwind of characters including the aforementioned critic, his friend/business partner (Zach Galifanakis), his very difficult acclaimed co-star (played, rather awesomely, by very difficult acclaimed actor Edward Norton) his recovering addict daughter (Emma Stone), his ex-wife (Amy Ryan), and two insecure and talented actresses (Naomi Watts and Andrea Riseborough). The biggest obstacle to success however is Riggan's past incarnation, Birdman, who haunts and taunts him; maybe Birdman is all he ever will be? 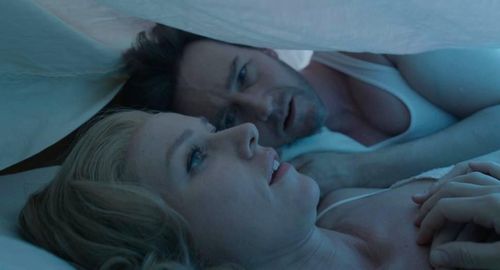 While the story is dizzying enough what really marks the movie as one-of-a-kind is its high-wire aesthetic energy. The drum and cymbal score, very unusual, contributes greatly to the pressure cooker narrative but the showiest contribution is the movie's camerawork. The cinematography by recent Oscar winner Emmanuel Lubezki (Gravity) is rich in color, ingenuity, technical challenges and unpredictable movements. He could well win back-to-back Oscars. Almost the entire film takes place inside the St. James Theater (which, coincidentally or not, recently housed Bullets Over Broadway: The Musical, which is, you'll remember, a stage play based on a movie about the staging of a Broadway play with crazy-neurotic actors. Sound familiar?).

The film is made to look as if it's all filmed in one continuous shot, which frees up the actors to do incredibly agile work, sliding nimbly between moods thoughts and feelings without obstruction or manipulation through editing. Take, for just one small example, this scene with Emma Stone as Sam, berating her actor/father/boss.

In a normal lesser movie, this would be edited to provide a continual back and forth of closeups, in the generic shot/reverse shot style you see everywhere on film and television. In this abnormal superior movie you get to watch the actors actually act their scenes, often together.

See Emma's temperature rise. You can trace Sam's anger rising and boiling over, and when it begins to evaporate, her face falling as she realizes how cruel she's been. You'd never be able to see this beautiful mini-arc in a movie that was constantly worried about losing your attention and jumping to different camera angles. 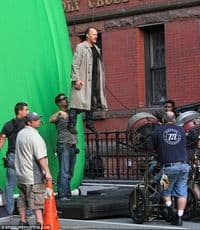 Any description of Birdman might make it sound dry, difficult, artistic, and cerebral and while it's definitely cerebral and artistic it isn't remotely dry or inaccessible. The superhero backstory, firmly plays with conventions of mainstream movies, and the drama is surprisingly rooted in the body, given that so many of the scenes might be taking place inside the head. It's jagged with feeling from blood, tears, pheromones, and especially flop sweat as this troupe of actors clash coordinate and claim their characters while their co-star and director, risking humiliating failure with an ambitious career move, lays it all on the line.

How it works out for Riggan Thompson and his play, you'll see in the movie. But how it works out for Michael Keaton and Iñárritu is not just a happy ending but a joyous one. Keaton triumphs with his career best work and Iñárritu, risking failure with this complicated comic detour from his glum and heavy filmography (21 Grams, Amores Perros, Biutiful, Babel) does too, succeeding beyond all expectations. They've made a miracle of a movie together. 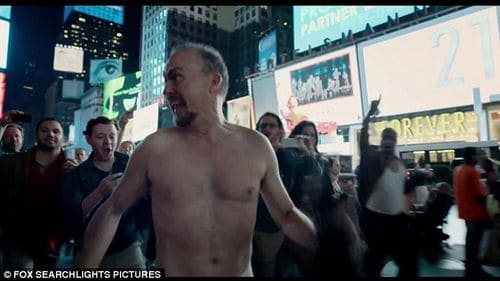