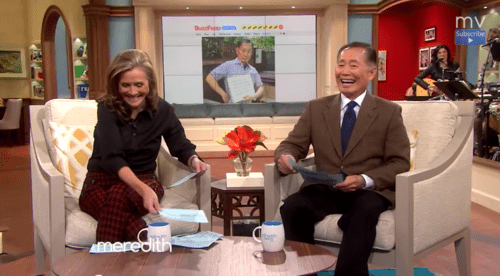 Stopping by The Meredith Vieira Show this week, George Takei did a dramatic reenactment of his recent collaboration with Buzzfeed where he provided witty answers to dumb questions about gay people.

Later, Meredith introduced a new charity campaign called "Hugs for Honey" – with the show donating $25 to GLAAD for every hug George could rack up. In a separate video, George revealed his craziest encounter with a "Trekkie," his celebrity crush, and whether he's more of a Walking Dead or American Horror Story kind of guy.