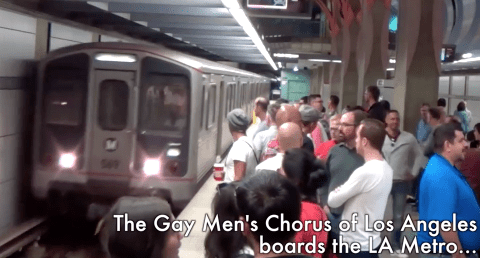 Here's something to lift your spirits if you've been shopping too much this Black Friday. The L.A. Gay Men's Chorus took over the city's Red Line subway singing an updated version of "Deck The Halls". They released the video today of their holiday-inspired flash mob, showing how they tried to spread some Christmas cheer on the train to North Hollywood last weekend. Some passengers were more thrilled than others by the impromptu performance (check out the shoulder shimmys by one woman feeling the spirit at the 1:34 mark) while other passengers just tried to ignore the festive group (in true subway rider fashion). 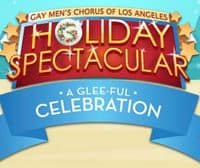 The video was actually promo for the group's upcoming annual holiday concerts at the Beverly Hills Saban Theater, December 13th and 14th. The annual shows are part of the group's 36th season, which includes the debut of a chamber ensemble piece in memory of Tyler Clementi. Earlier this fall, the chorus was part of another on-line sensation with their featured role in a hugely viral video (5M hits and counting) about actor and aspiring performance artist Shia LaBeouf.

You can watch their new holiday video AFTER THE JUMP…