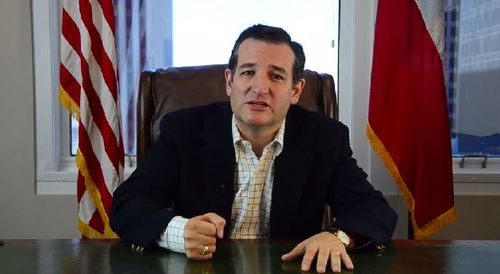 Although Ted Cruz was unable to attend the Family Research Council's anti-gay extravaganza in Houston last night (he was busy campaigning for Republican U.S. Senate hopeful Dan Sullivan in Alaska), the tea party firebrand still managed to record a message for the right-wing pastors in attendance.

Just this past week the mayor announced that they would withdraw the subpoenas of the pastors. Praise be to God! What an answer to prayer. By God's great and mighty hand, our faith once again remains free. But these threats are ever-present. They are coming from every direction and we must remain vigilant. If we speak with resounding voice and if we stand for religious liberty, the truth will prevail. Out of the rubble, we will restore the faith that is the rock of this nation.