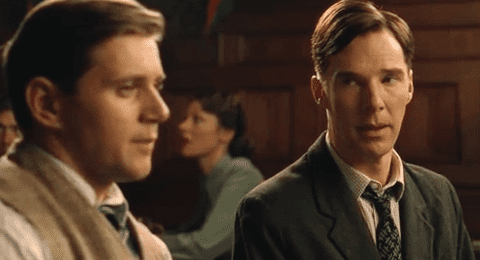 The man who broke the Nazi's Enigma code and conceived the modern computer was also, as they used to say, a "homosexual."

In this new clip from The Imitation Game, mathematician/genius Alan Turing (played by Benedict Cumberbatch) reveals his true nature while at a nightclub, chatting with a friend (played by Downton Abbey's Allen Leech). The scene is notable for the fact that it's Turing's friend who actually outs him, uttering the "H" word as Turing stumbles trying to explain his feelings towards his dancing date (a spinning Keira Knightley). Homosexuality at that time was illegal in the UK and Turing was persecuted and eventually prosecuted for it, leading to his tragic suicide.

The Imitation Game opened to strong reviews and huge audiences in four theatres last weekend, grossing a stunning $120,000 per screen average. By comparison, The Kings Speech opened in a similar number of theatres in 2010 grossing $88,000 per screen. The Weinstein Company is positioning the Turing biopic for awards season, and there has been big buzz about Cumberbatch being nominated for his first Oscar. However, there's also been some criticism of the film's lack of sex scenes for his character and the fact that some liberties were taken regarding Turing's relationship with the woman being discussed in the clip, who is apparently portrayed more as a failed romance than a friend. You can watch the full scene, AFTER THE JUMP…