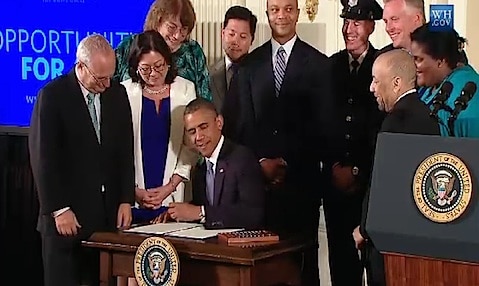 "It doesn't make much sense, but today in America, millions of our fellow citizens wake up and go to work with the awareness that they could lose their job, not because of anything they do or fail to do, but because of who they are — lesbian, gay, bisexual, transgender.  And that's wrong. We're here to do what we can to make it right — to bend that arc of justice just a little bit in a better direction." 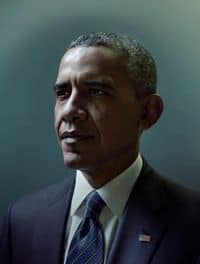 Although the order was signed in July, the process wasn’t yet complete because the Labor Department and the Office of Management & Budget had to draft a rule to implement the measure.

Once this final rule is published, it will become effective 120 days later and apply to federal contracts entered into or modified on or after that date.

“Americans believe in fairness and opportunity. No one should live in fear of being fired or passed over or discriminated against at work simply because of who they are or who they love.

"Laws prohibiting workplace discrimination on the bases of sexual orientation and gender identity are long overdue, and we’re taking a big step forward today to fix that.”

Patricia Shiu, head of the Labor Department’s Office of Federal Contract Compliance Programs, which is responsible for enforcing the order, said:

“We are building on the work of presidents and members of Congress from both parties who have expanded opportunities for America’s workers.

"This rule will extend protections to millions of workers who are employed by or seek jobs with federal contractors and subcontractors, ensuring that sexual orientation and gender identity are never used as justification for workplace discrimination by those that profit from taxpayer dollars.”

A group of about 140 religious leaders and advocates for religious freedom had petitioned the president for an exemption for faith-based groups.

Previous Post: « The OXD Mirror: New Music by Museum of Love, Akufen, ROTCIV and more
Next Post: Mariah Carey’s ‘All I Want For Christmas’ Gets 20 Remixed Music Styles: VIDEO »