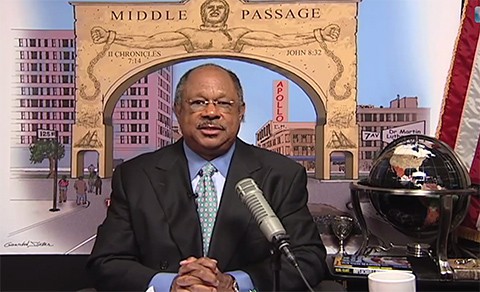 Hate Pastor James David Manning of the ATLAH church in Harlem is back and this time he's doubling down on his previous allegation that Starbucks puts gay men's semen in its lattes. According to Manning, Starbucks is doing this because gays who frequent the popular coffee retailer believe semen "'flavors up' the coffee 'and it makes you think that you're having a good time drinking that cup of latte with the semen in it.'"

While Starbucks is likely none too pleased with this, it appears a prankster has had a little fun at Manning's expense, sending Manning a "lawsuit" (alledgedly sent on Starbucks' behalf) claiming defmaion and other actionable injuries. Manning is not taken in. If anything, he insists this prank underscores the potency of his assertions about Starbucks and their gay semen lattes:

They do put semen in their lattes. They do you know. Most of it is synthetic. It has a synthetic quality to it but they do. They haves tested out. And like any entrepreneur looking for an edge like Coca-Cola during the years of its early marketing of Coca-Cola put cocaine in its drinks and people loved that…Starbucks is on the ropes…I am floating like a butterfly and stinging like a bee. And I'm not going to let this story go. I'm not gonna let it go.

As for the "lawyers" who issued the "lawsuit" to Manning? "Go to hell. Or Let's go to court. I've got Starbucks by the keisters."

Manning closed his rant with a warning to women–don't drink starbucks or you might get pregnant:

If you're drinking Starbucks, watch out if you're a woman. You might just get pregnant by drinking Starbucks. Because they've got some pretty potent semen in their drinks. And you will go home and tell your husband that you're pregnant and he'll say, 'But we haven't had sexual intercourse in years! Where did you get pregnant? Is it an immaculate conception?' NO! It was one of Starbucks' lattes that impregnated you! Me? I'm James David Manning, everybody. I'm the lord's servant."

Watch the video for yourself, AFTER THE JUMP…