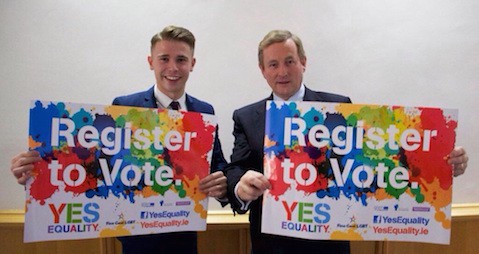 The Irish government yesterday announced that a referendum on same-sex marriage will take place in May 2015, reports The Journal.

Although an exact date has not yet been set, it is thought the vote may be held in the first week of the month.

Calling for a respectful campaign from all sides, Justice Minister Frances Fitzgerald said her officials would now begin work on the wording of the proposed constitutional amendment.

A recent Irish Times poll found that 71 percent of people intend to vote in favor of gay marriage.

“We do not take the outcome of the referendum for granted. Despite the strong support in the polls currently, we know that we will need every single possible vote on the day in order to win the referendum.”

Backed by government parties, the referendum was announced earlier this year by Prime Minister Enda Kenny. Kenny made headlines this month when he visited Dublin's Pantibar for Christmas drinks.

In what was seen as an opening salvo on what is likely to be a highly divisive campaign, the Catholic church in Ireland has released a manifesto outlining its opposition to same-sex marriage.

Watch Armagayddon, a video about absolute horror of marriage equality reaching Ireland, AFTER THE JUMP…