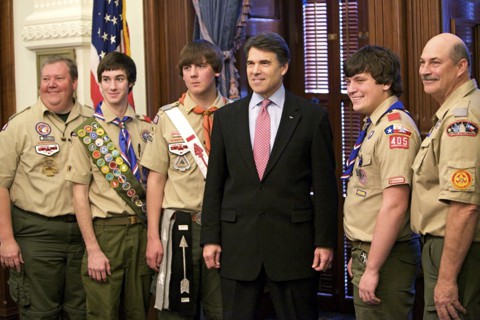 LGBT advocates in El Paso are objecting to the state of Texas' decision to lease a large tract of land to the Boy Scouts of America for a nominal amount.

The Texas Transportation Commission approved a 25-year lease Thursday for 222 acres in El Paso that reportedly will be the site of one of the Boy Scouts' largest urban camps.

The state is waiving a requirement that it seek fair-market value for the property "for social mitigation purposes."

It's not appropriate to give such public resources to an organization that does not allow gay men to serve as scoutmasters, said Skip Rosenthal, executive director of the group International AIDS Empowerment of El Paso and Las Cruces.

"Our city should be opposing this," Rosenthal said. "We should not be giving government perks to an organization that discriminates against gay men."

Rosenthal is calling on the city of El Paso, which has an ordinance prohibiting anti-LGBT discrimination, to pass a resolution opposing the lease.

Texas has no state law that prohibits it from entering contracts with organizations that discriminate against gays.

Republican Texas Gov. Rick Perry (above), who appoints members of the Transportation Commission, is an Eagle Scout who published a book about the Boy Scouts in 2008 in which he compared homosexuality to alcoholism.

Of course, the irony of the Boy Scouts' ban on gay adult leaders is that the organization has been covering up sex abuse by Scoutmasters for nearly a century.

This week, a jury in Connecticut found the Boy Scouts negligent and awarded $7 million to a man who was sexually abused by a Scoutmaster in the 1970s. It was the largest compensatory damages verdict ever against the Boy Scouts.

During the trial, the plaintiff's attorneys introduced evidence that the Boy Scouts of America knew for decades before the 1970s that child sexual abuse was widespread in Boy Scout troop activities across the country. Witnesses in the trial said the Boy Scouts maintained thousands of secret cases it called "the Confidential Files," dating to the early 1920s. The files were held in locked cabinets in the Boy Scouts national headquarters in Dallas, according to the attorneys.

Previous Post: « ASAP Science Wants to Help You Get Your Booty Moving: VIDEO
Next Post: Grieving Partner of Sydney Siege Victim Tori Johnson Speaks Out for the First Time: VIDEO »