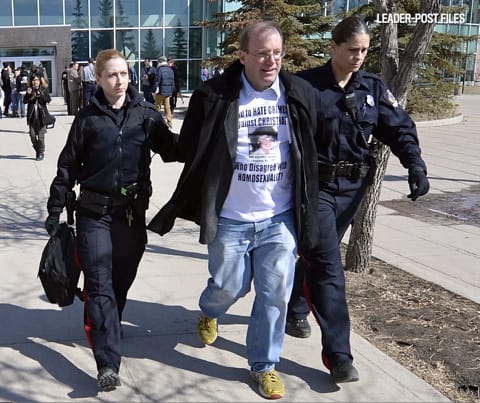 Anti-gay activist Peter LaBarbera was found not guilty in a Canadian court Monday of a mischief charge stemming from his arrest in April for protesting at the University of Regina.

LaBarbera, of Illinois-based Americans for Truth About Homosexuality, and Canadian anti-gay activist Bill Whatcott were arrested after they refused to leave campus despite an order from police.

Officials alleged LaBarbera and Whatcott were violating the university's Respectful Workplace Policy, because students said they felt discriminated against during previous protests by Whatcott. Police asked LaBarbera and Whatcott to leave because they were in possession of graphic anti-gay materials, including a large sign saying "Sodomy is sin" and T-shirts showing a woman who was murdered by a gay man.

CBC News reports on the not guilty verdict:

Today, Bill Whatcott reacted to the not guilty ruling by saying he'll return to the campus some time next year.

"They need to be a free and open place that allows debate and so I hope they reconsider their position and that they welcome debate or at least tolerate it," Whatcott said. "People with views that differ from theirs have a right to try to make their case on a publicly-funded campus."

Peter LaBarbera is in the United States and didn't attend court.

At their trial in October, court heard they were asked to leave the campus because their activities violated the U of R's policy on maintaining a respectful work environment.

The Leader-Post reports that Whatcott, who'd been arrested before for protesting on college campuses, uttered "thank you lord" upon hearing the verdict from Judge Marylynne Beaton of the Regina Provincial Court:

At the time, U of R provost Thomas Chase called the materials "graphic" and "disturbing."

But "the validity of (their) beliefs are not in issue," Beaton wrote in her decision.

"I find that the purpose of (their) attending the University of Regina was to communicate information and their actions were passive and non-aggressive," Beaton wrote. "The university's response was disproportionate to the peaceful distribution of flyers."

Whatcott said he plans to return to the University of Regina in January. No word on whether he'll bring LaBarbera.

In any case, the not guilty verdict is probably a good thing, because it avoids turning this lovely pair into martyrs for free speech, which may have been what they wanted.

LaBarbera, who spent the night in jail and was voluntarily deported the next day, said in a statement on AFTAH's website:

“Hopefully, this ruling will open up door to a resurgence of true tolerance and freedom in Canada. The Left in Canada, as in the United States, does not want debate but rather control. They fear unfettered exposure to moral truth and compelling facts about homosexuality–hence their campaign to silence Christians and others who speak out against sexual immorality and gender rebellion.

“The very fact that I was detained and searched at length twice by Border police upon entering Canada–merely because I and AFTAH espouse historic, biblical, Judeo-Christian teachings on homosexuality–reflects escalating ‘thought tyranny’ and anti-intellectualism in Canada which, if allowed to take root, will only lead to more rigid repression against believers in this great land.”

Listen to The Leader-Post's video report on the not guilty verdict here, and watch video of the arrests, AFTER THE JUMP …

Previous Post: « Washington County Clerk Wants To Know If All Same-Sex Couples Have The Right To Marry in Florida On Jan. 6
Next Post: Ian McKellen And Derek Jacobi Want You To Have A ‘Vicious’ Christmas: VIDEO »