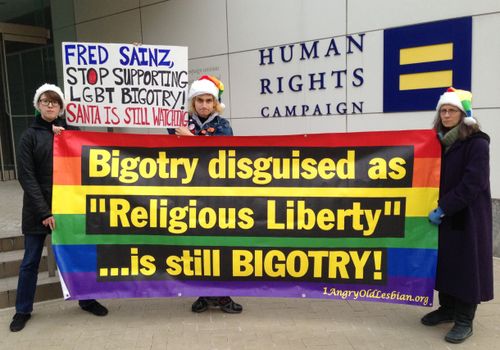 Fred Sainz, a vice president for the Human Rights Campaign’s communications and marketing division, has been quoted in The Washington Post lauding Jeb Bush for his recent comments on same sex marriage’s legalization in Florida.

“The vast majority of the rhetoric coming from many of these Republican politicians is complete and total denial of marriage being an institution that gay couples should have access to,” said Sainz, a former aide to George H.W. Bush during his Vice Presidency during the Reagan administration. “Why his position is novel and his tonal impact is important is he is at least willing to acknowledge that committed and loving gay people can get married.”

To be clear, Jeb Bush’s remarks were not an outright support of same sex marriage, but rather a begrudging deference to the court.

“We live in a democracy, and regardless of our disagreements, we have to respect the rule of law,” Bush said in a statement. “I hope that we can also show respect for the good people on all sides of the gay and lesbian marriage issue — including couples making lifetime commitments to each other who are seeking greater legal protections and those of us who believe marriage is a sacrament and want to safeguard religious liberty.”

In addition to his statement, however, Bush has been frank in expressing his belief that same sex marriage should (have) been put up to a popular vote, rather than decided in the courts. Though Sainz was not speaking on behalf of the HRC as a whole, his opinions regarding Bush are not entirely innocuous. By showering Bush with praise for his “evolution” of opinion, Sainz both allows him the space to dither on taking an appropriately clear position and to traffic in a stealthier brand of coded bigotry.

Demonstrators from One Angry Lesbian gathered outside of the HRC’s DC offices to protest Sainz’s explicit (and therefore the HRC’s implicit) endorsement of Bush.