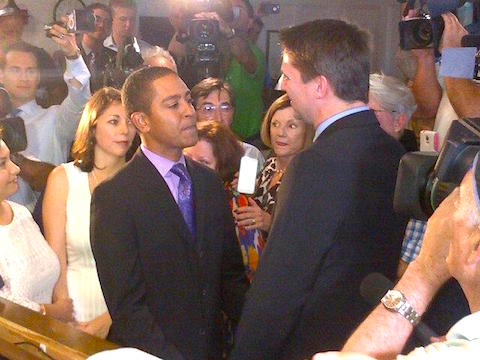 Catholic bishops in Florida say the decision to overturn the ban on same-sex marriage in the state is a threat to religious freedom, reports Pink News.

Yesterday, Miami-Dade County judge Sarah Zabel lifted the stay on her July ruling striking down the state's ban on same-sex marriage. Following her decision, Zabel proceeded to marry two of the gay couples who served as plaintiffs in the case.

In a statement following the ruling the bishops said marriage equality “threatens both religious liberty and the freedom of individuals to conscientiously object.”

Once again attacking gay parents, the statement reads in part:

“The conjugal nature of a marriage between a man and a woman has provided for millennia the basis for norms of marital exclusivity and permanence that made possible stable families necessary for human flourishing.

“[Marriage equality] advances the notion that marriage is only about the affective gratification of consenting adults. Such a redefinition of marriage does nothing to safeguard a child’s right to a mother and father and to be raised in a stable family where his or her development and well-being is served to the greatest extent possible.”

Watch the emotional courtroom reaction to Zabel lifting the stay, AFTER THE JUMP…

Previous Post: « Say ‘I Do’ To These 20 Twitter Pics of Marriage Equality Arriving in Florida: PHOTOS
Next Post: NYT Criticizes Obama Administration, Lawmakers Amidst Egyptian Persecution of Gays »