Michigan RNC Committeeman Dave Agema is facing renewed calls from his own party to remove him from positions of leadership after Agema posted a new racist Facebook post on New Year's Eve. 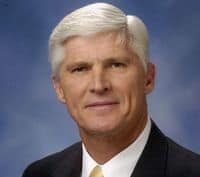 As you may recall, Agema has said that gays falsely claim people with AIDS as their lovers in order to cheat the system and get free medical benefits, and last January said Russia's anti-gay law is "common sense". Regarding the anti-Muslim remarks, Agema has posted "eye opening' Internet articles asking readers whether they had 'ever seen a Muslim do anything that contributes positively to the American way of life."

In a New Years’ Eve posting on his infamous Facebook page, disgraced Michigan GOP national committeeman Dave Agema reprinted an essay about African-Americans. Either Agema or somebody he is quoting endorses it as “very interesting” and “very enlightening” for “anyone concerned about crime in America.” The essay – since taken down by Agema – is copied from the May 9 edition of American Renaissance, a white supremacist magazine. 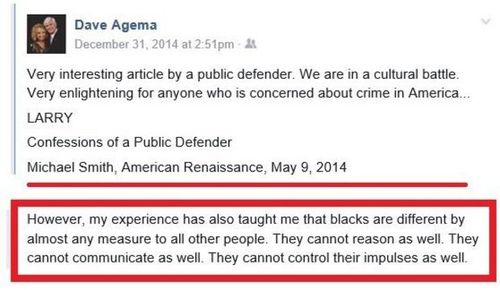 Talking Points Memo reports that Virginia GOP Chair Pat Mullins is urging his party to keep Agema out of the San Diego meeting of the Republican National Committee, and kick him out of the RNC permanently.

(Agema) then defended his Facebook post in a new post to his page on Tuesday and said that he saw the article in a newsletter by former Rep. Allen West (R-FL).

"I make no accusation that I agree with the statements supporting the author he posted. I do support Col West's commentary concerning the authors article and not the content of the article itself," Agema said. "It's sad that politically correctness has so taken over our society and is determined by those who desire to move our culture according to their agenda."

Following the initial post, RNC chairman Reince Priebus and Michigan Gov. Rick Snyder (R) both condemned Agema's comments. The Michigan state senate Republican caucus plans to send the RNC a letter urging the committee to expel Agema from the national meeting, according to The Detroit News.

Will he finally get the boot? Or will Republicans continue to keep them as one of their own? Stay tuned…