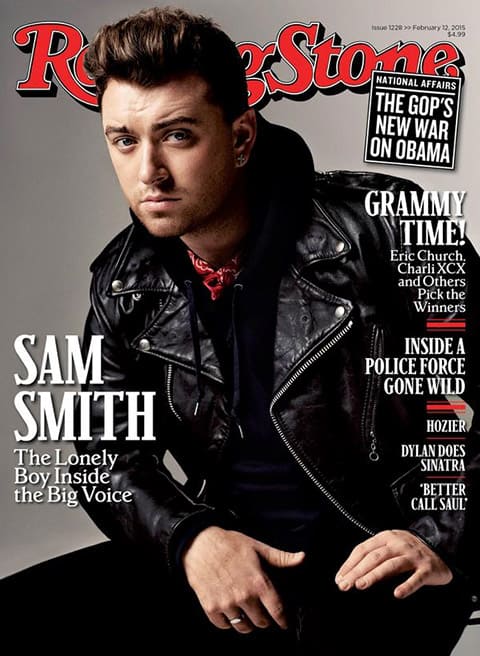 Out crooner and Grammy nominee Sam Smith covers this month’s Rolling Stone with the title “The Lonely Boy Inside The Big Voice” accompanying a brooding image of Smith clad in a black leather jacket. In the cover story, Rolling Stone talks with Smith about his public perception and also digs into his painful past.

On Smith’s teenage crush on a straight boy:

As a young teen, Smith wrote a “really intense” love letter to a popular, artistic kid two years older than him. The student turned out to be straight, but he wrote a long, thoughtful letter back, saying he only saw Smith as a friend. “It makes me emotional, actually,” Smith says, his eyes clouding up. “He looked out for me for the rest of school. He just made sure that if anyone took the piss out of me, he would stick up for me. He could have made it hell for me, you know?”

On being bullied after coming coming out:

Smith maintains that his childhood was happy “80 percent of the time,” but he details several painful experiences he had growing up. Once, as he was walking through his small hometown with his dad, someone drove by and yelled “faggot.” “I was just embarrassed that my dad had to see that, because I could only imagine how you feel as a parent. You just want to kill them. I was always embarrassed for the people around me. It actually never deeply affected me, you know?” The worst incident happened after he moved out of his small hometown. Soon after arriving in London, he was attacked while walking around in makeup. “I got punched in my neck, just out of nowhere,” Smith says. “It wasn’t the easiest.”

Smith also shared the magazine cover on Instagram as well, noting, “As a kid I dreamed of being on the cover of Rolling Stone. I couldn’t be happier x.”

Watch a video of Smith talking with Rolling Stone and, interestingly enough, taking the famous music rag along with him for a trip to the dentist, AFTER THE JUMP…