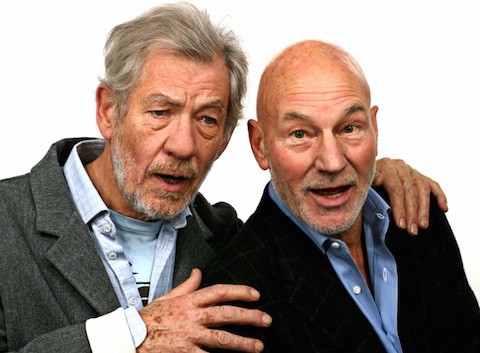 In a lengthy interview with The Advocate Sir Patrick Stewart speaks about his upcoming film Match, including a few discussions about sex that film's material bring up, such as his character Tobi expressing his love for going down on a woman and the fact that Tobi is bi. Naturally, this segued into Stewart's eternal support of the LGBT community, which he claimed felt "natural":

When I look back to my early career and early experience, my ease and comfort being in the company of and intimately close with gay and lesbian colleagues and friends was always, for me, the most natural, and I might even say at times appealing aspects of the life I was living.

I think this is where the theater is such an appealing world, because it embraces everything and always has. So there was never a moment where I made an intellectual choice that I would be a supporter of gay civil rights. It was always a natural and uncomplicated choice. Then later in life, as I got to know well-known activists like Ian McKellen, I was only too happy to join campaigns, march, and support in whatever way I could because it always seemed to me to be something that much too much fuss was being made about.

And when he was misidentified as a gay man last year by The Guardian when he expressed his support for Ellen Page on coming out, he was hardly offended:

Quite frankly, I was utterly flattered by that assumption.

Match is about Tobi, a master dancer who is interviewed by graduate student Lisa (Carla Gugino) and her husband, Mike (Matthew Lillard) about the days of his career, and the sacrifices that were required for the life he led. You can watch the trailer AFTER THE JUMP…