English actor, presenter and comedian Stephen Fry has confirmed that he is to marry his 27-year-old partner, stand-up comedian Elliott Spencer 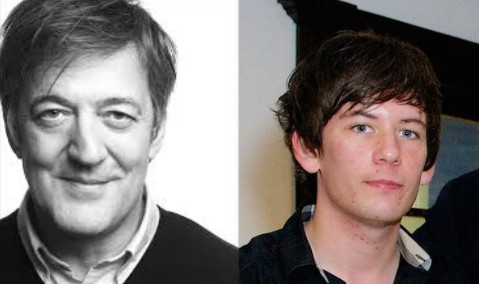 English actor, presenter, comedian and National Treasure Stephen Fry has confirmed that he is to marry his 27-year-old partner, stand-up comedian Elliott Spencer.

Attitude reports that Fry (57) has given formal notice to wed Spencer at a registry office in Norfolk, England.

Oh. It looks as though a certain cat is out of a certain bag. I’m very very happy of course but had hoped for a private wedding. Fat chance!

Fry was first seen in public with Spencer last November but the couple are thought to have been involved since last summer.

According to tabloid newspaper The Sun, a source said that Elliott has given Fry “a new lust for life” following a battle with depression and a 2012 suicide attempt:

“Stephen and Elliott get on brilliantly together. It’s fantastic to see Stephen with a smile on his face again.

“He has been very, very open about his battles with drugs and depression. Elliott seems to have given him the confidence to live his life again. It’s great to have the old Stephen back.”

Spencer's parents said they are delighted about the couple's decision to marry.

Fry has told his eight million Twitter followers that messages of congratulations have left him "close to sobbing".

Your adorable tweets are bringing me close to sobbing. Off for a walk and a blast of Jorge Bolet (thanks to @JRhodesPianist’s ace present)

Watch him discuss fame, addiction and mental health, AFTER THE JUMP…