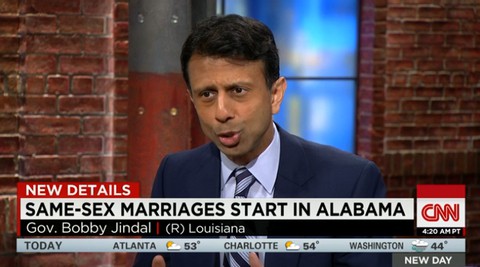 Louisiana Governor Bobby Jindal told CNN's New Day that he's not changing his opinion ('like Obama did') on marriage based on polls:

"I'm not one of those politicians…My faith teaches me that marriage is between a man and a woman. I don't believe in discrimination against anybody. I'm not for changing the definition of marriage and that's why I hope the Supreme Court decides not to overturn what the states have decided. In Louisiana it's in our state constitution. My hope is that the Supreme Court will respect what state legislators and states have already decided."

Jindal dodged a question several times about whether he's comfortable with local judges in Alabama defying a federal court order to issue marriage licenses to gay couple, instead saying,

"If the Supreme Court were to [rule for same-sex marriage] I think the remedy would be a constitutional amendment in the Congress to tell the courts you can't overturn what the states have decided."

Previous Post: « AL Senator Sessions: Judges Ruling on Marriage ‘Based on How They Feel’
Next Post: Sam Smith Talks About His 4 Grammys, His Sudden Fame, and His Ex-Boyfriends with Ellen: VIDEO »